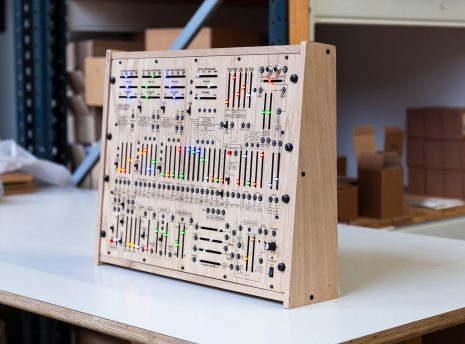 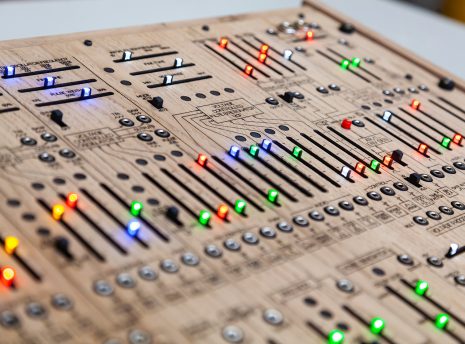 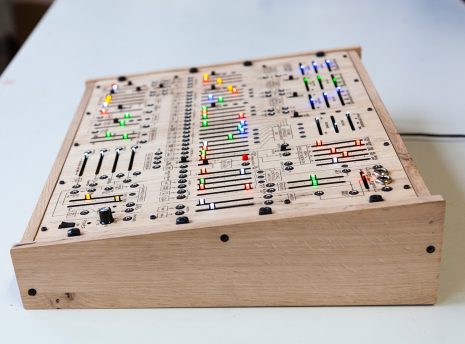 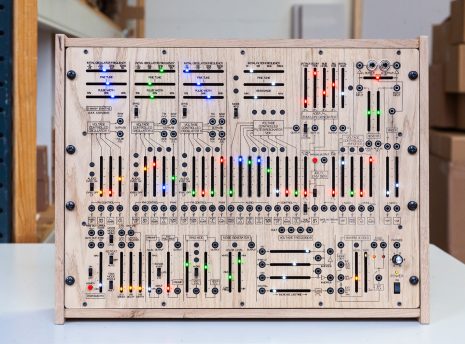 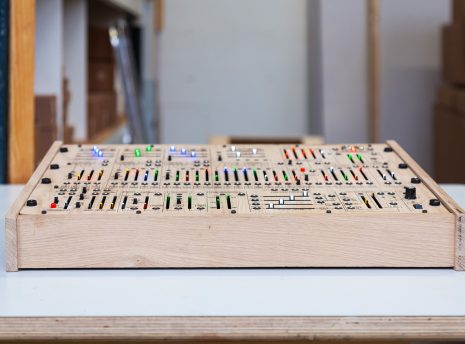 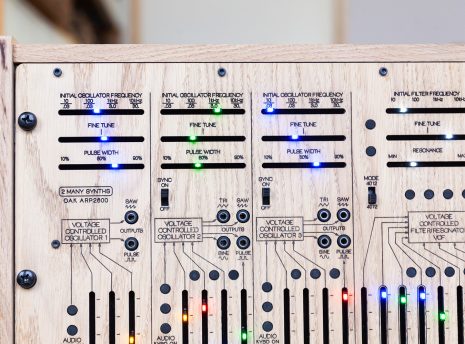 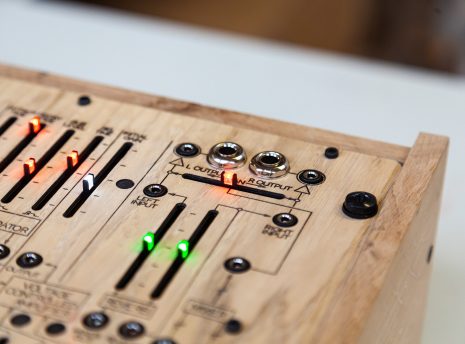 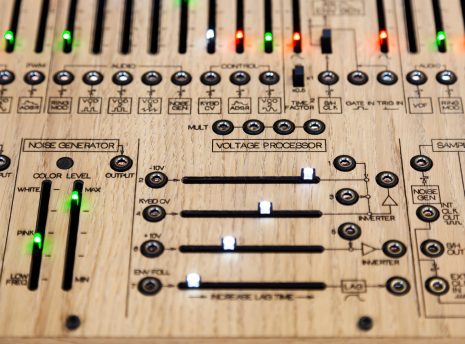 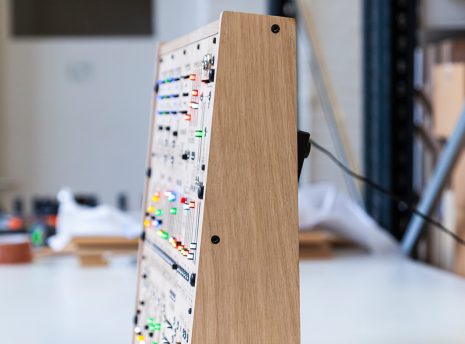 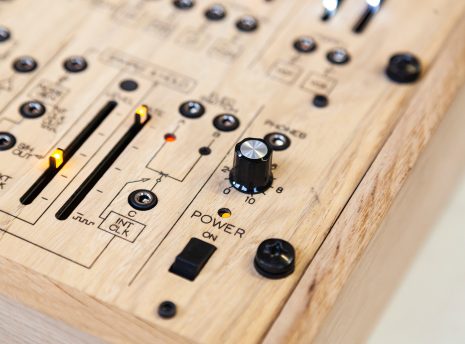 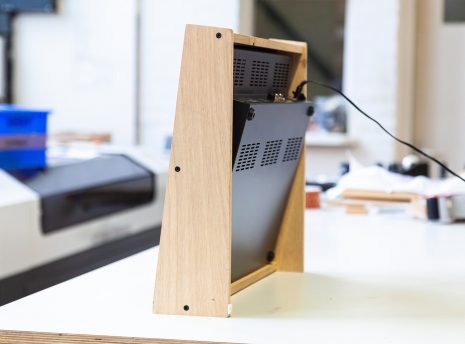 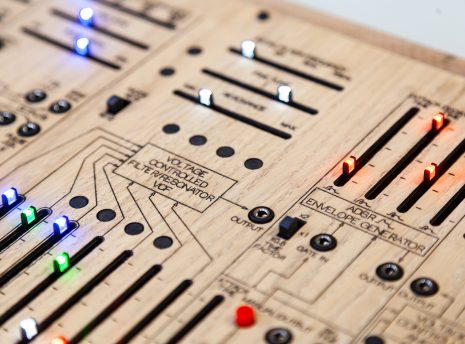 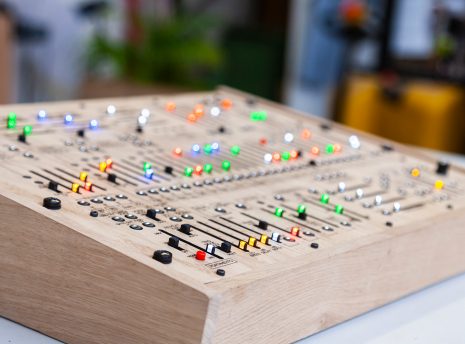 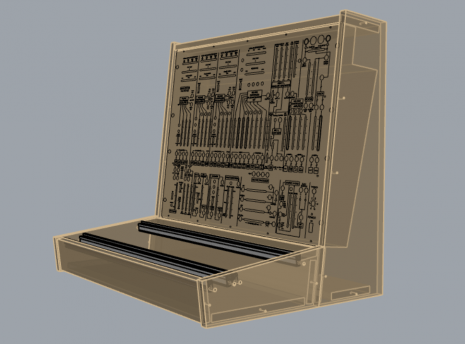 This is an oak veneer overlay and/or a 12mm solid oak enclosure. The overlay is made with 2 layers of cross-laminated veneer sheets, total appr. 1,5mm thickness. This gives a stable sheet (also to make other overlays but this one was a particular challenge because of the size). Then it is a lot of laser cutting time, cutting the precisely detailed overlay. Holes are cut and all text and lines are laser-engraved.

The oak stand can have it flat on the desk (like I use it) or standing up which is more common, but then with the current setup, the synth comes out a little at the back. In the production model, I’ll make it a little deeper so it will not stick out of the back anymore. I’ll also elevate it 4cm, like in the original cases, so you can place a keyboard in front (Keystep Pro or such) without the cables getting in the way of the sliders.

p.s. The synth itself is optional as well, both the black/orange one as well as the grey meany if you are looking for a better Reverb!

NOTE: The set/overlay will be made in batches due to the purchase and processing of the wood veneer. The price might increase after the first batch since this is a holiday-time calculation with some pre-assumptions on purchasing and processing the veneer in particular and some details which need to be changed in the enclosure production.

Double sided Oak veneer overlay
12mm solid Oak enclosure
This enclosure will be slightly higher then on the pictures so when standing up straight it will also fully enclose the back of the case (on the pictures you see that the black comes out a little on the prototype). This enables you to either place it flat on your desk or standing up. Note that the case comes flat-packed for oversea-shipment, within Europe I'll pre-mount it.
Finish
Finishing with Osmo hard-wax oil is recommended, that is 2 layers of oil which dries up matt and gives good protection for the wood. If you leave it untreated, that is an option, but note that the veneer can 'work' so you'll then have to oil it (double-sided!) yourselves. Black oil is also an option, but ONLY for the enclosure, because you will not be able to read the engraving then, the overlay will be coated with Osmo hard-wax oil then.
Behringer ARP2600
The synth itself is excluded in the above options, but you can select it here as well so I'll purchase it for you and ship it all assembled together. I do not have them in stock (yet) so I'm also depending on stock supply and delivery times of third party suppliers.
Shipping box (optional)
I now also offer super-strong triple-layered cardboard boxes. When you order all three items together, it might be wise to ship them in this. An overlay itself can be sent flat-packed as well as the enclosure.
4u 95hp additional skiff?
As latest developement (first ones are being made at the moment) I've also included a skiff case adding a 3U and a 1U row of Eurorack in front of the 2600! Do note that if you order it together with this skiff, the Behringer 2600 will get a higher front, so the skiff can stand in front without blocking the sliders. Including black rails and threaded inserts, but do note that this is excluding power. So to power it, it is best to get a 4HP power module with a flying bussboard (Behringer CP1A, eoWave, uZeus, etc).

Made to order (currently estimated 3-4 weeks)